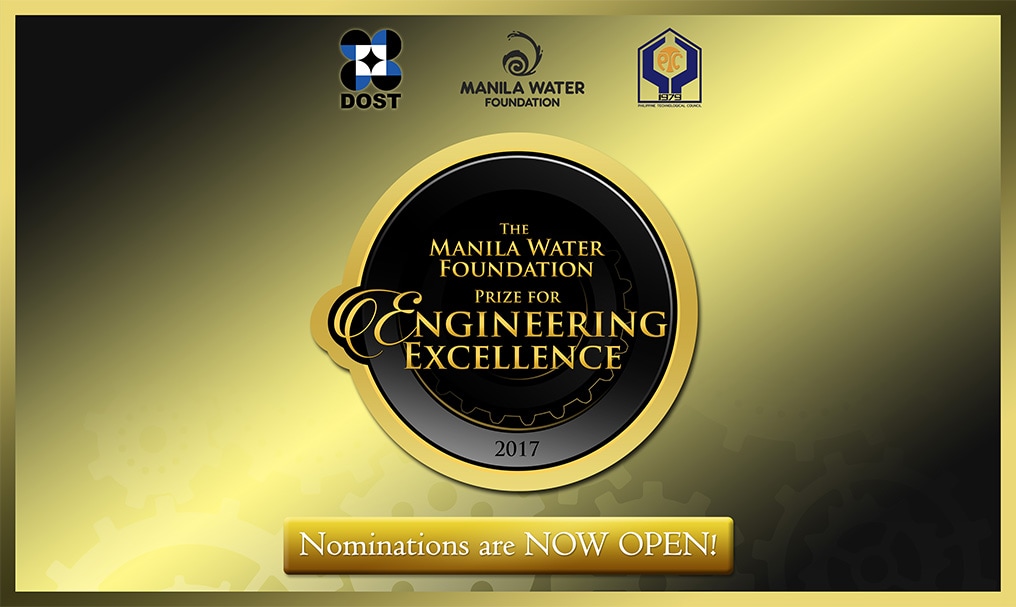 Nominations are now officially open for the 2017 run of the first-ever nationwide search for exemplary engineers and scientists who have developed and implemented projects that champion water, sanitation, environment and sustainability for marginalized communities.

The biennial Manila Water Foundation Prize for Engineering Excellence, which was first launched in partnership with the Department of Science and Technology (DOST) in 2015, previously honored five distinguished Filipinos who have paved the way for reinvention, creativity, and discovery that provided solutions to problems and difficulties that plague our nation.

Joining Manila Water Foundation (MWF) and DOST this 2017 is the Philippine Technological Council (PTC), the umbrella organization of all accredited professional engineering organizations recognized by the Professional Regulation Commission and self-certifying engineering professional organizations in the country. The triumvirate will join forces to find five new individuals who will be given PhP500,000 each for their inspiring engineering and scientific solutions that have resulted in positive social impacts.

MWF President Ferdinand Dela Cruz intimated his gratitude for the support that the Prize has been receiving from DOST, as well as his delight for having PTC starting this year. “We are truly grateful to the new DOST administration, led by Secretary Fortunato Dela Peña and Undersecretary Brenda Nazareth-Manzano, for agreeing to extend the partnership we have forged during the maiden edition of the Prize in 2015. Accolades are also in order for Former Secretary Mario Montejo, Undersecretary Rowena Cristina Guevara, and their team for contributing to the success of the first run. Now with PTC on board, we are optimistic that we will be able to reach out to more ingenious engineers and scientists like the first batch of awardees who are still soaring to greater heights up to this day,” he said.

The 2015 awardees are, indeed, continuing to dedicate their genius for the benefit of society. Dr. Rex Demafelis has successfully scaled up his community-based biofuel program, which gives benefiting farmers from several provinces more crops and higher-yielding sources of income. Dr. Merlinda Palencia and her team have made their organo-mineral project more accessible and open for use in more communities in the Philippines with the construction and launch of a manufacturing plant that ensures better waste management and treatment for the benefit of our water systems. Dr. Enrico Paringit continues to lead the Phil-LIDAR 1, which is more commonly known as Project NOAH for disaster-risk reduction. He and his team's mapping resources have been providing the knowledge and tools for gathering details necessary for assessing risks and exposure of communities to floods and storm surges, which are now becoming more frequent and destructive due to climate change. Dr. Evelyn Taboada, who is also a recipient of the ASEAN Outstanding Engineering Achievement Award, incessantly finds ways to make her brainchild of converting mango wastes to high-value products helpful to marginalized communities in Cebu. Lastly, Dr. Joel Joseph Marciano, who heads the group of scholars and engineers working on Diwata 2 that is set to launch in 2018, is one of just three practicing engineers and educators in our country to be conferred the title of "Ambassador" from Hokkaido University.

Eligible to be nominated are bona fide Filipinos who have a degree in any engineering course or related sciences and have been actively performing engineering functions in the Philippines for a cumulative total of at least ten years.
​
More details, as well as downloadable forms, can be seen at http://manilawaterfoundation.org/engineering-excellence. Nominations will close on June 30, 2017.