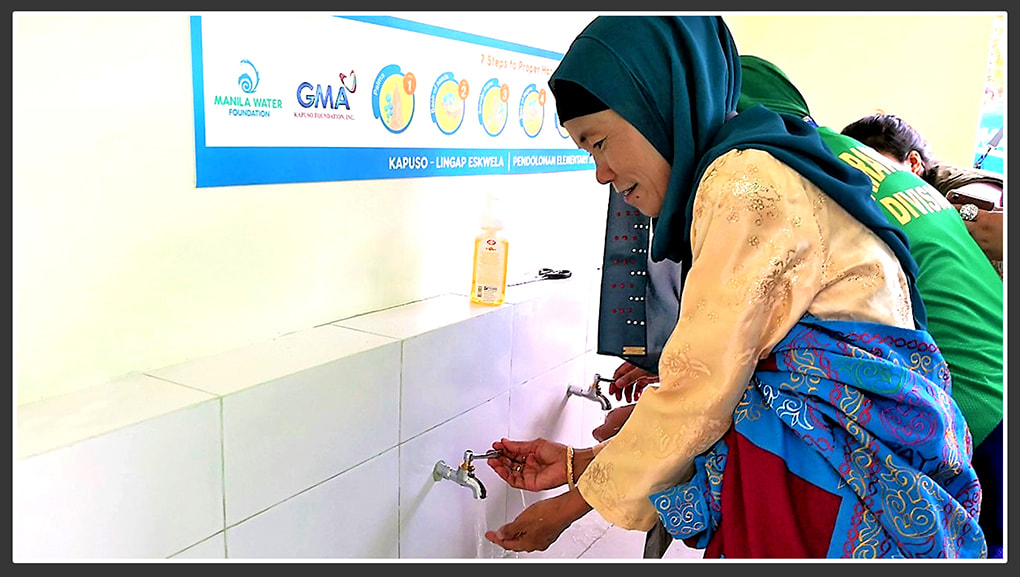 Through the pledges gathered from Manila Water talents, Manila Water Foundation (MWF) worked hand-in-hand with GMA Kapuso Foundation (GMAKF) in constructing handwashing facilities for schools, and with Philippine Red Cross (PRC) in distributing hygiene kits to those affected by the siege in Marawi City, Lanao del Sur.
New handwashing facilities for pupils of CBAPES and PES

Utilizing the pledges gathered from L.O.V.E. MWF : Roadshow for the Heart of the Enterprise, MWF constructed handwashing facilities for pupils of Camp Bagong Amai Pakpak Elementary School (CBAPES) and Pendolonan Elementary School (PES) in Marawi City, which were turned over on October 29 and December 6, respectively. The facilities were under the MWF flagship program Lingap Eskwela and in partnership with GMAKF’s Rebuild Marawi Project.

Rikki Escudero-Catibog, Executive Vice President (EVP) and Chief Operating Officer (COO) of GMAKF expressed her gratitude to the project’s multi-sectoral donors and volunteers during her speech at the turnover ceremony at CBAPES. “I want to thank each and every one, because, without their help, nothing would have happened,” she said. “When [Manila Water Foundation] found out that the school was going to be turned over, they said that they wanted to make sure that the students had adequate handwashing facility here at Camp Bagong Amai Pakpak,” she added.

Sarah Basir-Bantuas, Principal of CBAPES, reiterated the importance of handwashing among their pupils. “We need the handwashing [facility] for our pupils as this will ensure that their hands are [free from diseases] in their everyday activities.”

Monaoray Taratingan, School Head of PES, recalled their experience during Marawi siege. She mentioned that they called for a parents-teachers conference about the re-opening of the school to help children recover from the siege. To continue the classes, they opted for temporary classrooms at first. Eventually, efforts from partner organizations such as feeding programs and construction of new classrooms and facilities came and helped the school get back on its feet. “My heart is full at the thought of having our own handwashing facility. I am grateful to Manila Water [Foundation] for this initiative for our school learners,” she said in Filipino.

After the inauguration, MWF distributed hygiene kits to pupils and staff, and provided a supply of handwashing soap to the schools in order to encourage better handwashing habits and promote a healthier lifestyle among the pupils.

Hygiene kits for residents of Sarimanok

Aside from the inauguration of newly built handwashing facilities, 219 displaced families in Barangay Sarimanok, Marawi City received hygiene kits from MWF. The initiative was made possible through the donation of Manila Water talents, who set aside a portion of their salaries earlier this year under the employee engagement program, Bawat Patak Tumatatak.

MWF hopes to make more collaborations with organizations such as GMAKF and PRC, as well as tap more Manila Water talents in enabling change among areas affected by disasters such as Marawi City.